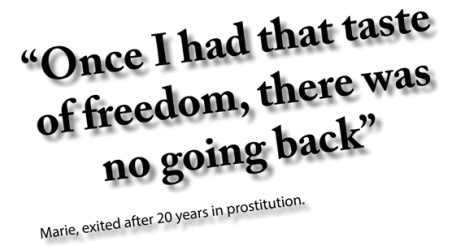 A new report shows that lack of support services, criminal convictions, alcohol and drug abuse, housing, and violence from buyers and pimps are the most common barriers that stop women from exiting prostitution.

The report – Breaking down the barriers: a study of how women exit prostitution – is a three-year joint study between Eaves and London South Bank University. Funded by the Big Lottery, its aim was to assess the effectiveness of interventions designed to support women in England who want to leave prostitution. Given the number of women who participated in the research, it provides a great deal of insight into the exiting process.

The findings of the executive summary report are based on 114 in-depth interviews with women involved in or exited from prostitution, and other experts and professionals working in the field. It is the largest UK-based study of its kind.

Yesterday, Monday 5th November 2012, was the launch of the executive summary, with the full report to be published later in the year.

1. Many women were able to leave prostitution by receiving the appropriate support to overcome the barriers at the right stage for them.

3. Women involved in indoor prostitution faced a range of barriers to exiting including, problematic alcohol and drug use (61%), housing (55%), childhood violence (67%).

5. Providing dedicated support to help women who want to exit was found to be an extremely cost-effective way of preventing further physical or emotional harm associated with their continued involvement in prostitution.

Sign up for our newsletter Stay up to date with our supporters, campaigns and consultations...

Molly* says… “When I was 38, I was raped and beaten by my boyfriend. He turned my life upside down and it… read more